Use slow shutter or not for bald eagle shooting

When we shoot bald eagles in flight, usually we set up the shutter speed high (at least 1/1000 sec or higher) in order to avoid motion blurriness. Motion blurriness could be from the eagle movement, or the camera which the photographer cannot synchronize with the eagle movement or some other source of motion. I usually go to upper Skagit River for bald eagles and take photos from a boat. The boat is also moving and vibrating which also can become the source of motion. The focal length typically we use is from 200-600mm range. The longer the lens, the more motion  blurriness would be introduced.

On the other hand, if we can synchronize our camera with the eagle movement reasonably well, we will be able to capture an image with dynamic motion. However, for obvious reasons, the probability of earning usable images would be less than the ones with high shutter speed.

This note addresses the pros and cons as well as some examples between low speed and high speed shutter setting for bald eagle shooting (from a boat). 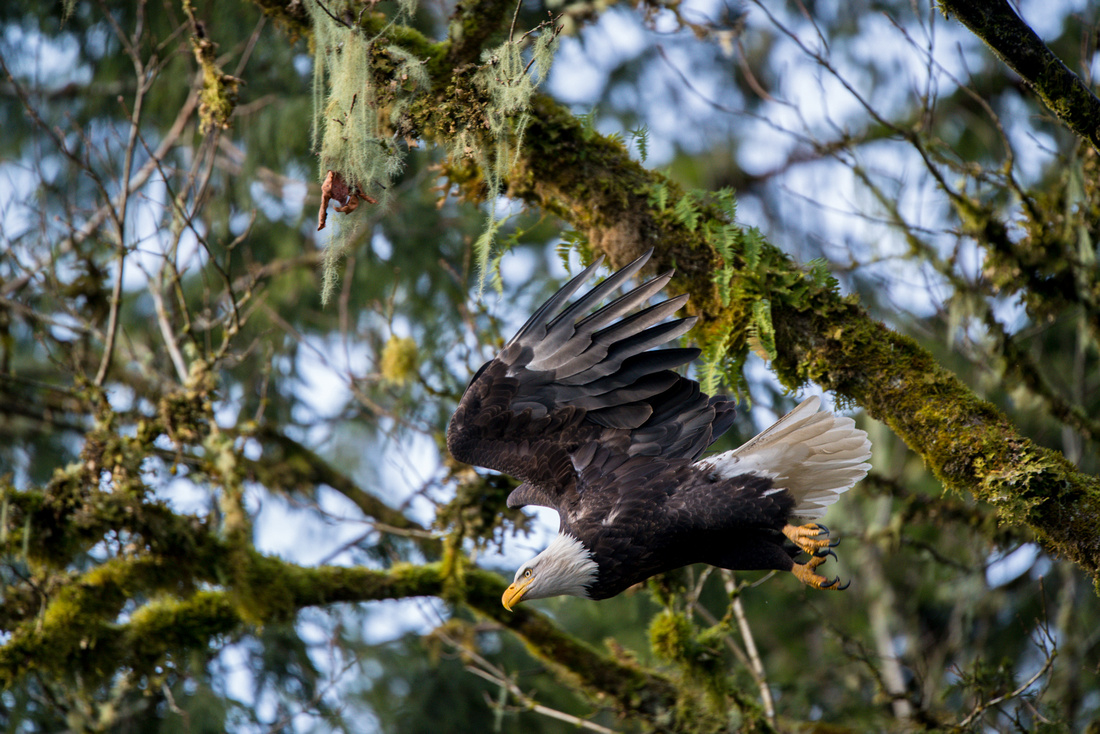 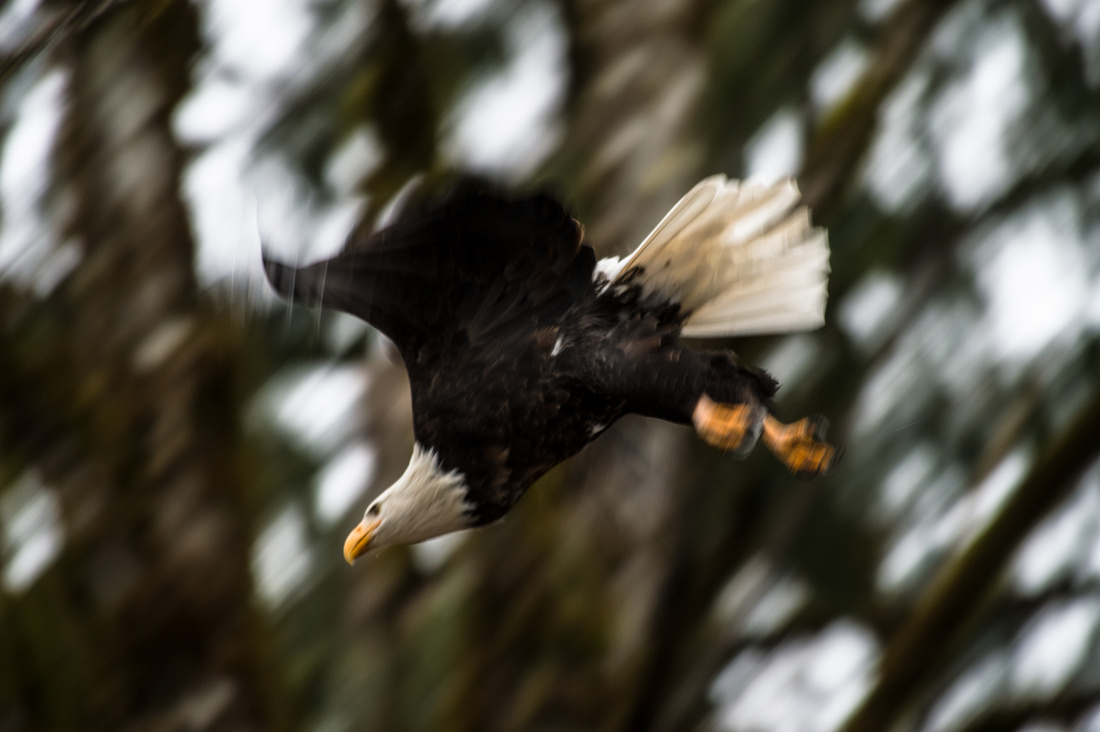 In these examples, I've leaned the followings:

#1: Advantage of high speed is not only sharpness and clarity but also capturing and exhibiting the surrounding environment very well.

#2: Contrary, the image with slower shutter speed expresses movement by showing the background burr and moving trace lines. Note that this image did not perfectly synchronized with the eagle movement so that even the face of eagle is not crisp sharp and clear.

#3: Motion of eagle is not always the same direction. The whole body of eagle is moving toward lower and left but legs, wings, tail, even face are moving slightly different direction. This makes very challenging perfectly crisp and clear image with slower shutter speed.

#5: It is not the camera burst speed to gain good image. D800E can capture 4 images per second at the maximum as opposed to 10 images with D4. As shown above, Since I could see the object more (as the time of mirror up is shorter relative to the shutter interval), I could compose and trace the eagle movement easier. if the shutter was open at the right time, it will capture a very good moment. The probability may vary though. 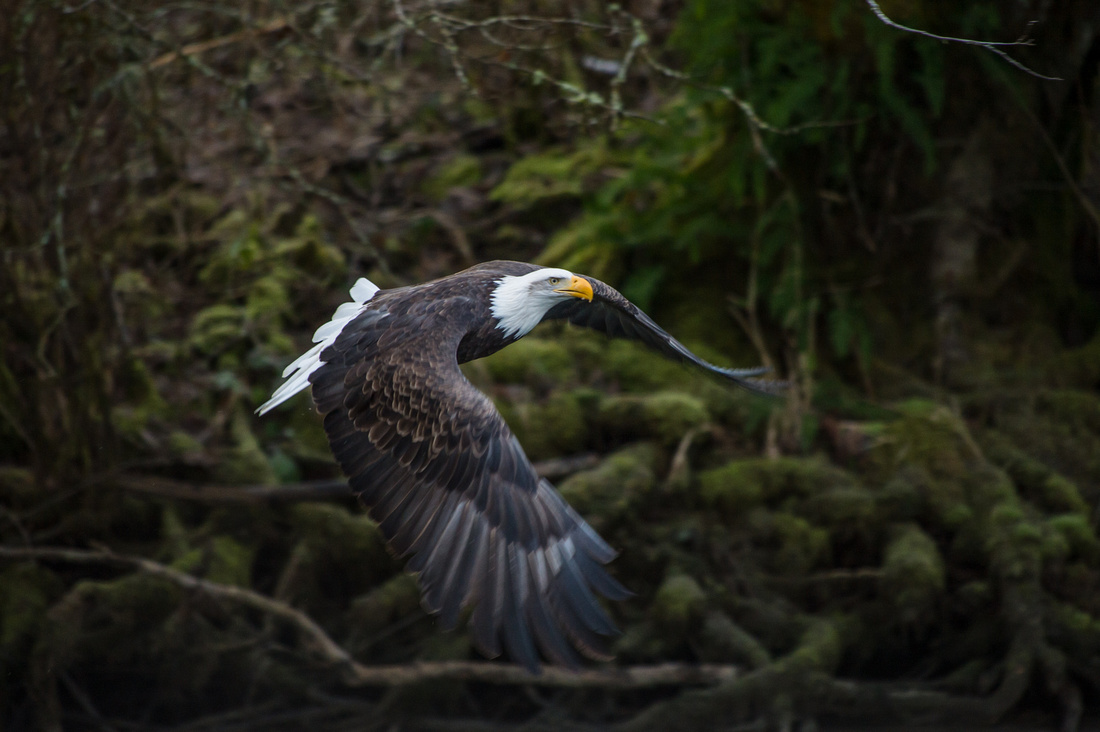 You may be able to see more differences though images I took with the following slideshows. The first slideshow is from trips on the 4th and 9th of December 2013.

The following slideshow is from the trip on the 19th of December, 2013.

I would appreciate if you can tell me which way do you like better (slow shutter or high shutter speed) and why.

more here(non-registered)
If you are a photographer and want to shoot bald eagle, then yes, you should use slow shutter or not. Bald eagles are beautiful birds. They live in parks, lakes, wetlands and other areas in North America. Because they can be hard to see because they blend so well with the environment, it's important to use a good setup before they come swooping in.
No comments posted.
Loading...
Recent Posts
2016 February Japan Trip (Part-1) === Red Crown Cranes and Fish Owls === TPE/Skyfire and Morning Sun Moon and Sun in 2016 around Seattle Starry night at old church Night Sky in Northwest Bald Eagles at Skagit River with KING 5 News Color in Fall Color images Focus adjustment in very dark environment Blue Angels at SeaFair ===Updated for 2022=== July 4th Fireworks in Lake Union
Keywords
Seattle eagles Moon Mt. Needle Space Sun lake Park TPE
Archive
January February March April May June July August September October November December
© Seattle Digital Photography
User Agreement
Cancel
Continue