On the way to Palouse, we stopped by a very old church (built in 1905) near Spokane for starry sky. It was just after a storm passed by and the sky was not clear to see the stars. However, we met the property owner Mr. Nathan Mielke (who is the 5th generation of original pionieer came from Germany) and obtain a good story of the church and his family history.

[Gottlieb Mielke (my great great grandfather) homesteaded the ground in 1883.  He designed 5 acres in the corner of his parcel to be for a church and cemetery.  They were German Methodists and built the first church in 1883.  Gottlieb died in 1892 or 93?  (can't remember the exact date) and his son Edward Mielke (my great grandfather) build an even bigger church in 1905 (the same year he build a new house for himself (the house that I am currently living in).  The cemetery was formally established in the late 1880's and some of the first settlers were placed on the hillside.  All of my father's line has been buried there.  First Gottlieb, then Edward, and my grandfather Carl and his brother George.  The early pioneers are buried there along with their offspring.  The church still has an active congregation, but it is much smaller now.  My family is entrusted to take care of the buildings and the land, but we claim no ownership of the building.  Its just the right thing to do.]

The church is set up on a little hill surrounded by miles of fields and no light pollution except for very little from the city of Spokane (East direction). I initially the city light could be disturbing for taking starry photos but found the light is rather good and enhances the background color.

Below image was taken when the sky remains blue. The pinkish horizon color behind the church is from the city of Spokane. The church was shed by moonlight behind me.

Next day evening, after finishing sunset at Steptoe Butte in Palouse, we drove up to this church again. When we arrived, the sky was clear and full of stars. After we start shooting, the clouds formulated from northeast sky and moving towards us. I set up the cameras for time-lapse and star trails. The church is facing Northeast, the swirl will be on the left. In order to capture the north star (47 degrees elevation angle), I used one camera with a 14-24mm lens and another camera with 24-70mm for tighter scene (no swirl), and  composed to include beautiful wheat fields. This church setting in the field are so unique and rare to find, I will definitely come back and take photos in near future. 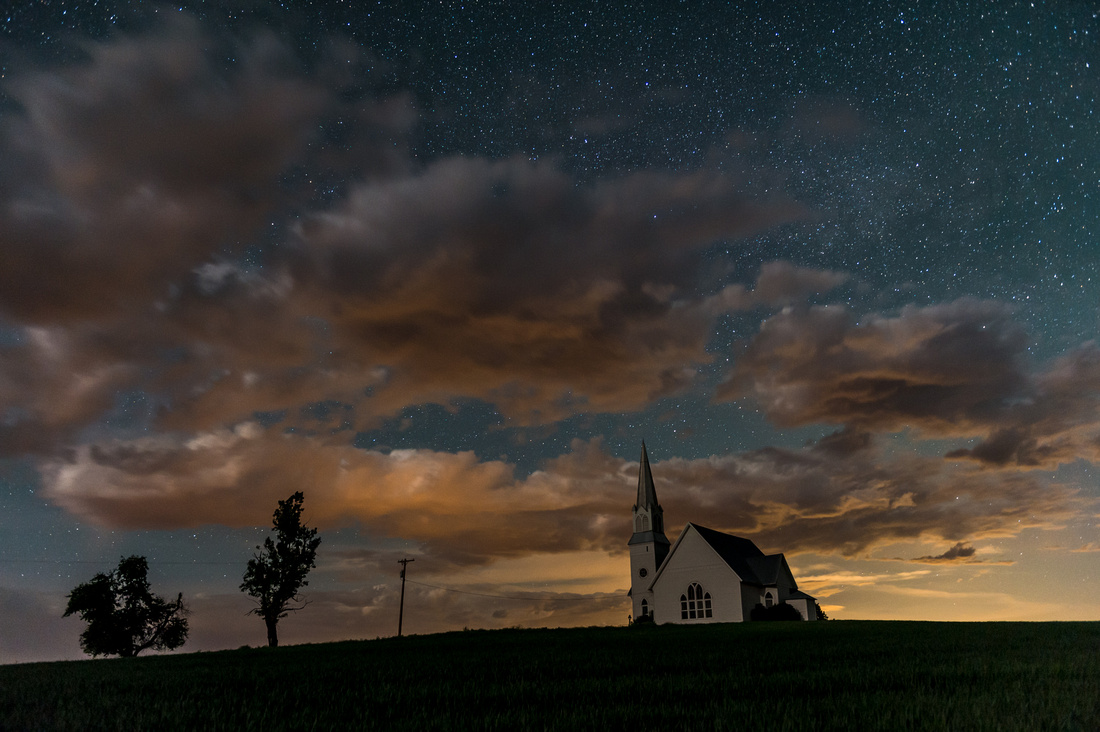 The reflection of the city light created nice painterly effect and a passer-by car's headlight shed the church perfectly. 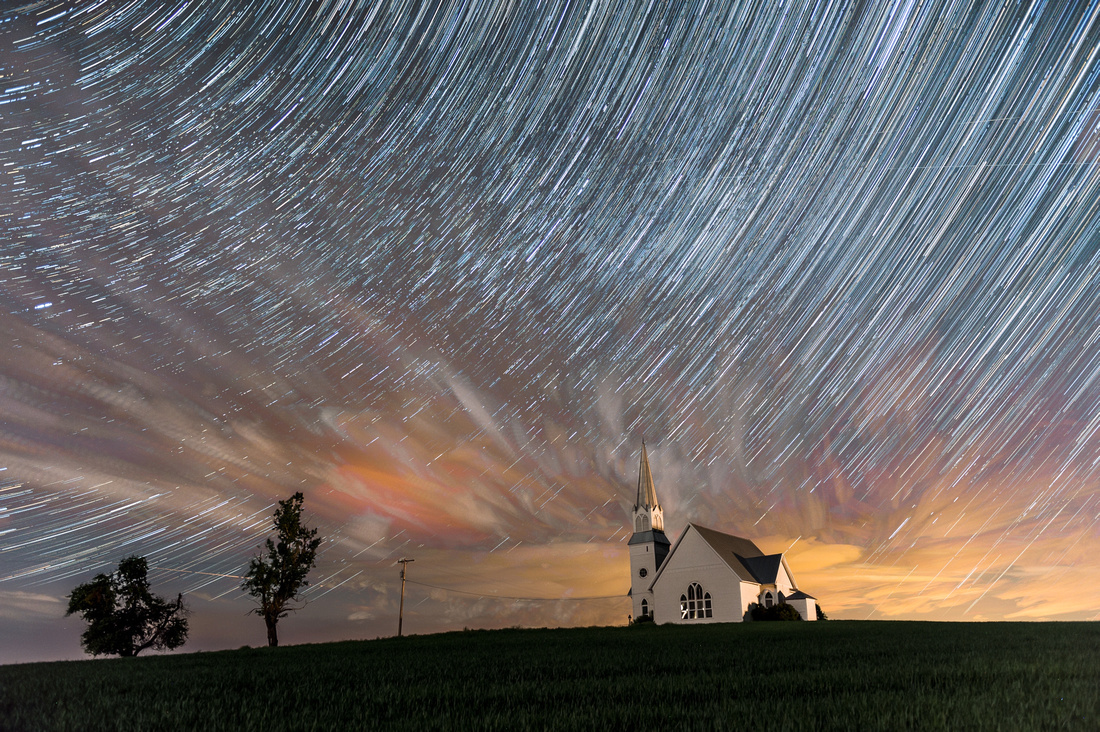 Following two images were taken with 14-24mm lens at 15mm. Red lights by our team photographers painted the field and resulted in unexpected effect. 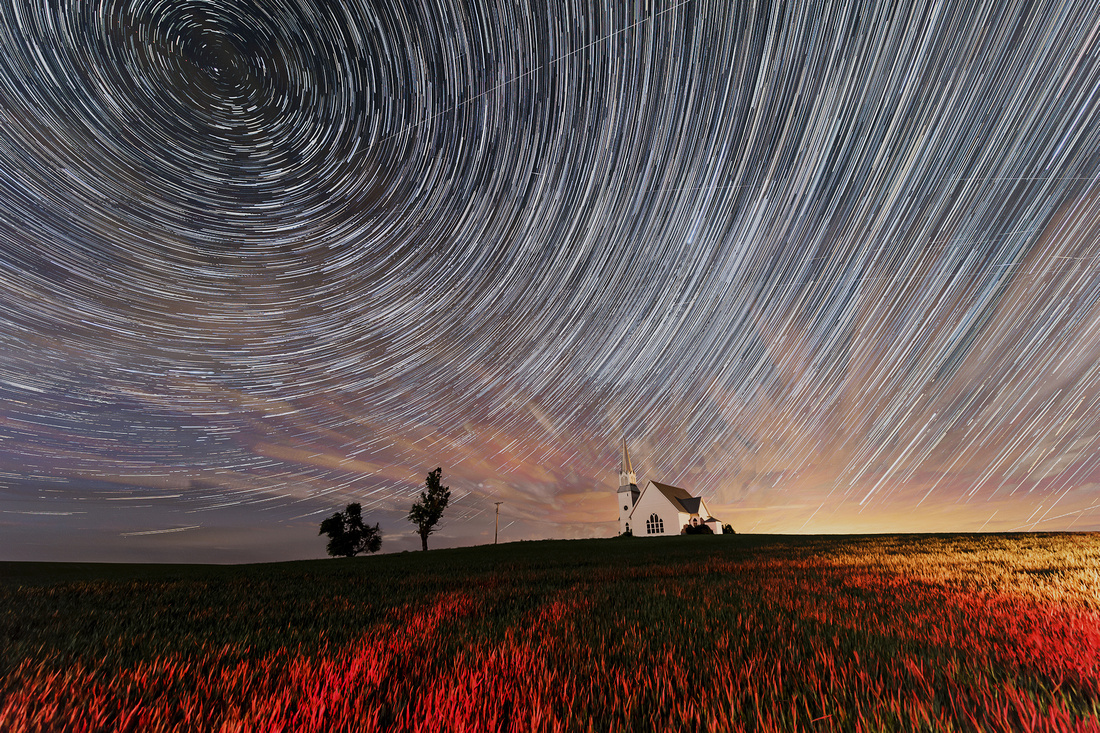 Below is "without red light contamination". 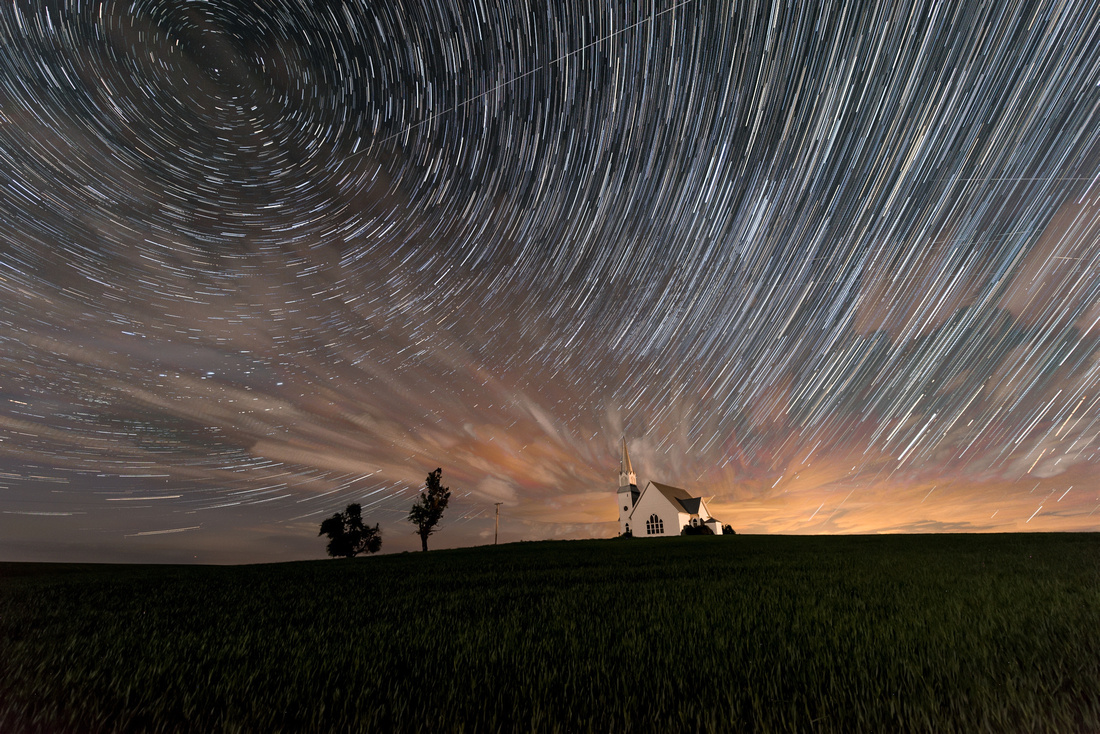 Following is a short time-lapse movie and you can see how the clouds moved and unexpected lights came in.